The remedial conservation and support jacketing of the Massospondylus carinatus neotype 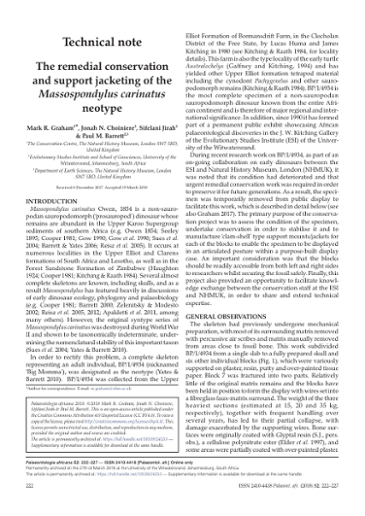 Massopondylus carinatus Owen, 1854 is a non-sauropodan sauropodomorph (‘prosauropod’) dinosaur whose remains are abundant in the Upper Karoo Supergroup sediments of southern Africa (e.g. Owen, 1854; Seeley, 1895; Cooper, 1981; Gow, 1990; Gow et al., 1990; Sues et al., 2004; Barrett and Yates, 2006; Reisz et al., 2005). It occurs at numerous localities in the Upper Elliot and Clarens formations of South Africa and Lesotho, as well as in the Forest Sandstone Formation of Zimbabwe (Haughton, 1924; Cooper, 1981; Kitching and Raath, 1984). Several almost complete skeletons are known, including skulls, and as a result Massospondylus has featured heavily in discussions of early dinosaur ecology, phylogeny and palaeobiology (e.g. Cooper, 1981; Barrett, 2000; Zelenitsky and Modesto, 2002; Reisz et al., 2005, 2012, Apaldetti et al., 2011, among many others). However, the original syntype series of Massospondylus carinatus was destroyed during World War II and shown to be taxonomically indeterminate, undermining the nomenclatural stability of this important taxon (Sues et al. 2004; Yates and Barrett, 2010). In order to rectify this problem, a complete skeleton representing an adult individual, BP/1/4934 (nicknamed ‘Big Momma’), was designated as the neotype (Yates and Barrett, 2010). BP/1/4934 was collected from the Upper Elliot Formation of Bormansdrift Farm, in the Clocholan District of the Free State, by Lucas Huma and James Kitching in 1980 (see Kitching and Raath, 1984, for locality details). This farm is also the type locality of the early turtle Australochelys (Gaffney and Kitching, 1994) and has yielded other Upper Elliot formation tetrapod material including the cynodont Pachygenelus and other sauropodomorph remains (Kitching and Raath, 1984). BP/1/4934 is the most complete specimen of a non-sauropodan sauropodomorph dinosaur known from the entire African continent and is therefore of major regional and international significance. In addition, since 1990 it has formed part of a permanent public exhibit showcasing African palaeontological discoveries in the J. W. Kitching Gallery of the Evolutionary Studies Institute (ESI) of the University of the Witwatersrand. During recent research work on BP/1/4934, as part of an on-going collaboration on early dinosaurs between the ESI and Natural History Museum, London (NHMUK), it was noted that its condition had deteriorated and that urgent remedial conservation work was required in order to preserve it for future generations. As a result, the specimen was temporarily removed from public display to facilitate this work, which is described in detail below (see also Graham, 2017). The primary purpose of the conservation project was to assess the condition of the specimen, undertake conservation in order to stabilise it and to manufacture ‘clam-shell’ type support mounts/jackets for each of the blocks to enable the specimen to be displayed in an articulated posture within a purpose-built display case. An important consideration was that the blocks should be readily accessible from both left and right sides to researchers whilst securing the fossil safely. Finally, this project also provided an opportunity to facilitate knowledge exchange between the conservation staff at the ESI and NHMUK, in order to share and extend technical expertise.

Palaeontologia africana 2018. ©2018 Mark R. Graham, Jonah N. Choiniere, Sifelani Jirah & Paul M. Barrett. This is an open-access article published under the Creative Commons Attribution 4.0 Unported License (CC BY4.0). To view a copy of the license, please visit http://creativecommons.org/licenses/by/4.0/. This license permits unrestricted use, distribution, and reproduction in any medium, provided the original author and source are credited. The article is permanently archived at: https://hdl.handle.net/10539/24253 — Supplementary information is available for download at the same handle.

The following license files are associated with this item: