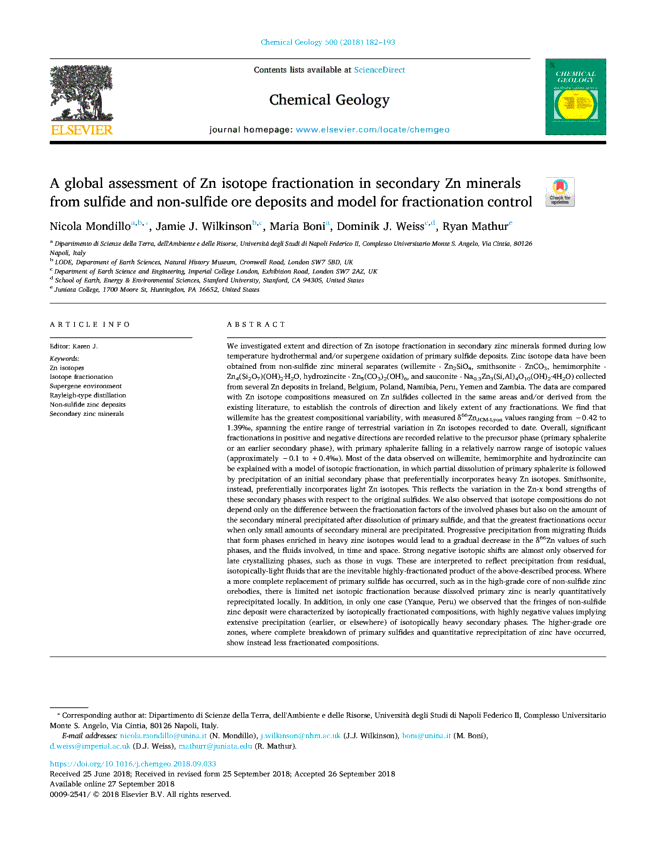 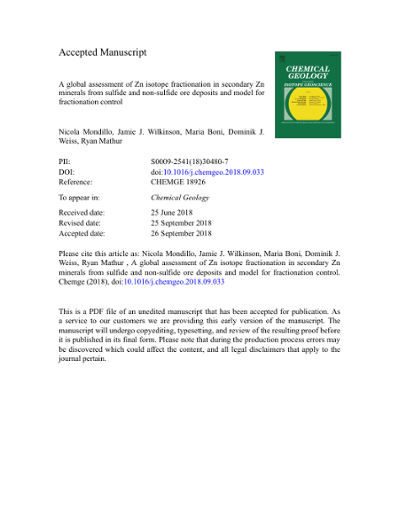 We investigated extent and direction of Zn isotope fractionation in secondary zinc minerals formed during low temperature hydrothermal and/or supergene oxidation of primary sulfide deposits. Zinc isotope data have been obtained from non-sulfide zinc mineral separates (willemite - Zn2SiO4, smithsonite - ZnCO3, hemimorphite - Zn4(Si2O7)(OH)2·H2O, hydrozincite - Zn5(CO3)2(OH)6, and sauconite - Na0.3Zn3(Si,Al)4O10(OH)2·4H2O) collected from several Zn deposits in Ireland, Belgium, Poland, Namibia, Peru, Yemen and Zambia. The data are compared with Zn isotope compositions measured on Zn sulfides collected in the same areas and/or derived from the existing literature, to establish the controls of direction and likely extent of any fractionations. We find that willemite has the greatest compositional variability, with measured δ66ZnJCM-Lyon values ranging from −0.42 to 1.39‰, spanning the entire range of terrestrial variation in Zn isotopes recorded to date. Overall, significant fractionations in positive and negative directions are recorded relative to the precursor phase (primary sphalerite or an earlier secondary phase), with primary sphalerite falling in a relatively narrow range of isotopic values (approximately −0.1 to +0.4‰). Most of the data observed on willemite, hemimorphite and hydrozincite can be explained with a model of isotopic fractionation, in which partial dissolution of primary sphalerite is followed by precipitation of an initial secondary phase that preferentially incorporates heavy Zn isotopes. Smithsonite, instead, preferentially incorporates light Zn isotopes. This reflects the variation in the Zn-x bond strengths of these secondary phases with respect to the original sulfides. We also observed that isotope compositions do not depend only on the difference between the fractionation factors of the involved phases but also on the amount of the secondary mineral precipitated after dissolution of primary sulfide, and that the greatest fractionations occur when only small amounts of secondary mineral are precipitated. Progressive precipitation from migrating fluids that form phases enriched in heavy zinc isotopes would lead to a gradual decrease in the δ66Zn values of such phases, and the fluids involved, in time and space. Strong negative isotopic shifts are almost only observed for late crystallizing phases, such as those in vugs. These are interpreted to reflect precipitation from residual, isotopically-light fluids that are the inevitable highly-fractionated product of the above-described process. Where a more complete replacement of primary sulfide has occurred, such as in the high-grade core of non-sulfide zinc orebodies, there is limited net isotopic fractionation because dissolved primary zinc is nearly quantitatively reprecipitated locally. In addition, in only one case (Yanque, Peru) we observed that the fringes of non-sulfide zinc deposit were characterized by isotopically fractionated compositions, with highly negative values implying extensive precipitation (earlier, or elsewhere) of isotopically heavy secondary phases. The higher-grade ore zones, where complete breakdown of primary sulfides and quantitative reprecipitation of zinc have occurred, show instead less fractionated compositions.

© 2018 Elsevier B.V. This document is the authors' final accepted version of the journal article. You are advised to consult the published version if you wish to cite from it.