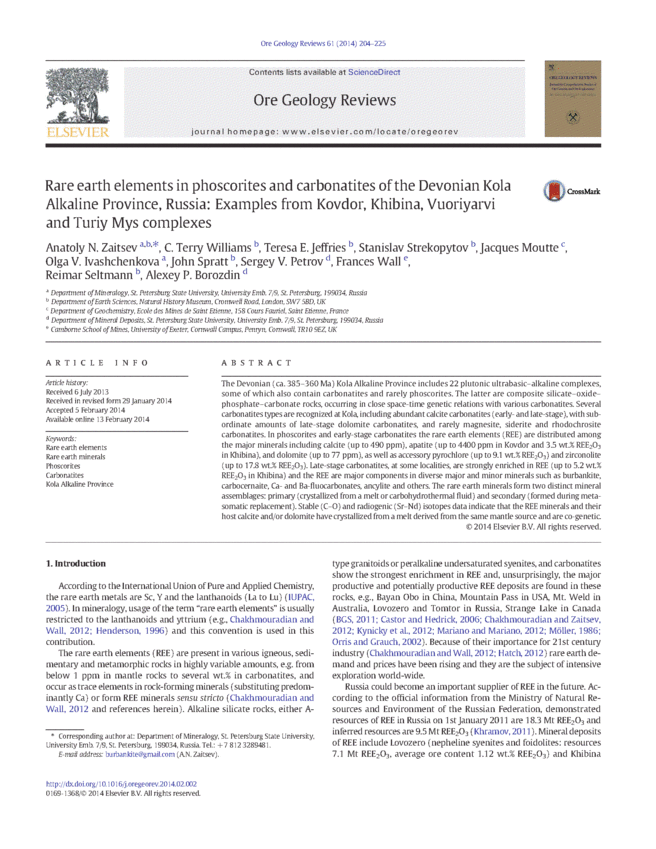 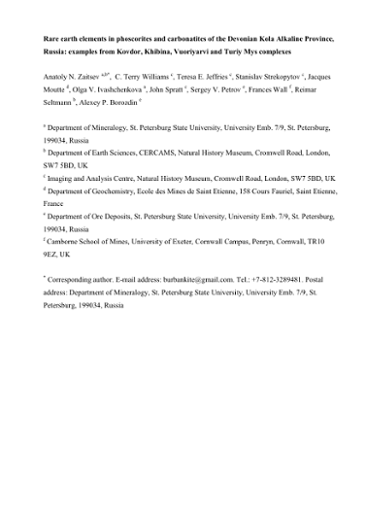 he Devonian (ca. 385–360 Ma) Kola Alkaline Province includes 22 plutonic ultrabasic–alkaline complexes, some of which also contain carbonatites and rarely phoscorites. The latter are composite silicate–oxide–phosphate–carbonate rocks, occurring in close space-time genetic relations with various carbonatites. Several carbonatites types are recognized at Kola, including abundant calcite carbonatites (early- and late-stage), with subordinate amounts of late-stage dolomite carbonatites, and rarely magnesite, siderite and rhodochrosite carbonatites. In phoscorites and early-stage carbonatites the rare earth elements (REE) are distributed among the major minerals including calcite (up to 490 ppm), apatite (up to 4400 ppm in Kovdor and 3.5 wt.% REE2O3 in Khibina), and dolomite (up to 77 ppm), as well as accessory pyrochlore (up to 9.1 wt.% REE2O3) and zirconolite (up to 17.8 wt.% REE2O3). Late-stage carbonatites, at some localities, are strongly enriched in REE (up to 5.2 wt.% REE2O3 in Khibina) and the REE are major components in diverse major and minor minerals such as burbankite, carbocernaite, Ca- and Ba-fluocarbonates, ancylite and others. The rare earth minerals form two distinct mineral assemblages: primary (crystallized from a melt or carbohydrothermal fluid) and secondary (formed during metasomatic replacement). Stable (C–O) and radiogenic (Sr–Nd) isotopes data indicate that the REE minerals and their host calcite and/or dolomite have crystallized from a melt derived from the same mantle source and are co-genetic.

Copyright © 2014 Elsevier B.V. All rights reserved. The attached document is the authors' final accepted version of the journal article. You are advised to consult the publisher’s version if you wish to cite from it.