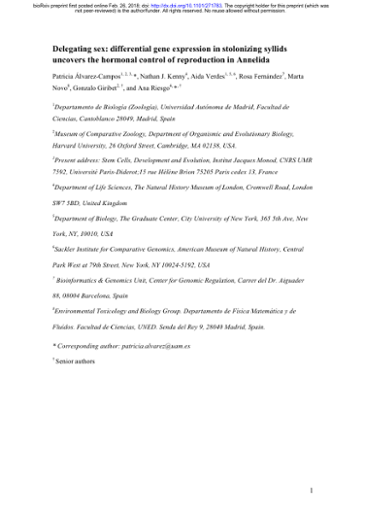 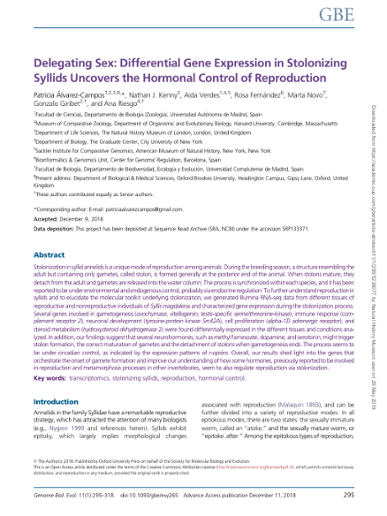 Stolonization in syllid annelids is a unique mode of reproduction among animals. During the breeding season, a structure resembling the adult but containing only gametes, called stolon, is formed generally at the posterior end of the animal. When stolons mature, they detach from the adult and gametes are released into the water column. The process is synchronized within each species, and it has been reported to be under environmental and endogenous control, probably via endocrine regulation. To further understand reproduction in syllids and to elucidate the molecular toolkit underlying stolonization, we generated Illumina RNA-seq data from different tissues of reproductive and nonreproductive individuals of Syllis magdalena and characterized gene expression during the stolonization process. Several genes involved in gametogenesis (ovochymase, vitellogenin, testis-specific serine/threonine-kinase), immune response (complement receptor 2), neuronal development (tyrosine-protein kinase Src42A), cell proliferation (alpha-1D adrenergic receptor), and steroid metabolism (hydroxysteroid dehydrogenase 2) were found differentially expressed in the different tissues and conditions analyzed. In addition, our findings suggest that several neurohormones, such as methyl farnesoate, dopamine, and serotonin, might trigger stolon formation, the correct maturation of gametes and the detachment of stolons when gametogenesis ends. The process seems to be under circadian control, as indicated by the expression patterns of r-opsins. Overall, our results shed light into the genes that orchestrate the onset of gamete formation and improve our understanding of how some hormones, previously reported to be involved in reproduction and metamorphosis processes in other invertebrates, seem to also regulate reproduction via stolonization.

Copyright (c) The Authors 2018. Published by Oxford University Press on behalf of the Society for Molecular Biology and Evolution. This is an Open Access article distributed under the terms of the Creative Commons Attribution License (http://creativecommons.org/licenses/by/4.0/), which permits unrestricted reuse, distribution, and reproduction in any medium, provided the original work is properly cited.
ae974a485f413a2113503eed53cd6c53
10.1101/271783