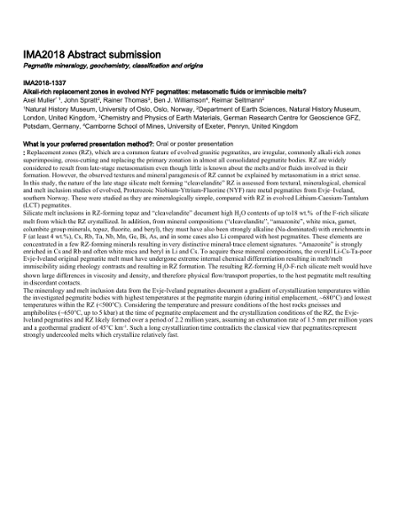 IMA2018 Abstract submission Pegmatite mineralogy, geochemistry, classification and origins IMA2018-1337 Alkali-rich replacement zones in evolved NYF pegmatites: metasomatic fluids or immiscible melts? Axel Muller* 1, John Spratt2, Rainer Thomas3, Ben J. Williamson4, Reimar Seltmann2 1Natural History Museum, University of Oslo, Oslo, Norway, 2Department of Earth Sciences, Natural History Museum, London, United Kingdom, 3Chemistry and Physics of Earth Materials, German Research Centre for Geoscience GFZ, Potsdam, Germany, 4Camborne School of Mines, University of Exeter, Penryn, United Kingdom What is your preferred presentation method?: Oral or poster presentation : Replacement zones (RZ), which are a common feature of evolved granitic pegmatites, are irregular, commonly alkali-rich zones superimposing, cross-cutting and replacing the primary zonation in almost all consolidated pegmatite bodies. RZ are widely considered to result from late-stage metasomatism even though little is known about the melts and/or fluids involved in their formation. However, the observed textures and mineral paragenesis of RZ cannot be explained by metasomatism in a strict sense. In this study, the nature of the late stage silicate melt forming “cleavelandite” RZ is assessed from textural, mineralogical, chemical and melt inclusion studies of evolved, Proterozoic Niobium-Yttrium-Fluorine (NYF) rare metal pegmatites from Evje–Iveland, southern Norway. These were studied as they are mineralogically simple, compared with RZ in evolved Lithium-Caesium-Tantalum (LCT) pegmatites. Silicate melt inclusions in RZ-forming topaz and “cleavelandite” document high H2O contents of up to18 wt.% of the F-rich silicate melt from which the RZ crystallized. In addition, from mineral compositions (“cleavelandite”, “amazonite”, white mica, garnet, columbite group minerals, topaz, fluorite, and beryl), they must have also been strongly alkaline (Na-dominated) with enrichments in F (at least 4 wt.%), Cs, Rb, Ta, Nb, Mn, Ge, Bi, As, and in some cases also Li compared with host pegmatites. These elements are concentrated in a few RZ-forming minerals resulting in very distinctive mineral-trace element signatures. “Amazonite” is strongly enriched in Cs and Rb and often white mica and beryl in Li and Cs. To acquire these mineral compositions, the overall Li-Cs-Ta-poor Evje-Iveland original pegmatite melt must have undergone extreme internal chemical differentiation resulting in melt/melt immiscibility aiding rheology contrasts and resulting in RZ formation. The resulting RZ-forming H2O-F-rich silicate melt would have shown large differences in viscosity and density, and therefore physical flow/transport properties, to the host pegmatite melt resulting in discordant contacts. The mineralogy and melt inclusion data from the Evje-Iveland pegmatites document a gradient of crystallization temperatures within the investigated pegmatite bodies with highest temperatures at the pegmatite margin (during initial emplacement, ~680°C) and lowest temperatures within the RZ (<500°C). Considering the temperature and pressure conditions of the host rocks gneisses and amphibolites (~650°C, up to 5 kbar) at the time of pegmatite emplacement and the crystallization conditions of the RZ, the Evje- Iveland pegmatites and RZ likely formed over a period of 2.2 million years, assuming an exhumation rate of 1.5 mm per million years and a geothermal gradient of 45°C km-1. Such a long crystallization time contradicts the classical view that pegmatites represent strongly undercooled melts which crystallize relatively fast.

The attached document is the authors’ submitted version of the oral presentation. You are advised to consult the publisher’s version if you wish to cite from it.