Aveline's Hole: An Unexpected Twist in the Tale 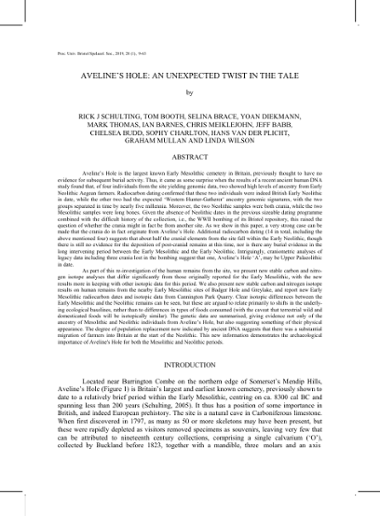 Aveline's Hole is the largest known Early Mesolithic cemetery in Britain, previously thought to have no evidence for subsequent burial activity. Thus, it came as some surprise when the results of a recent ancient human DNA study found that, of four individuals from the site yielding genomic data, two showed high levels of ancestry from Early Neolithic Aegean farmers. Radiocarbon dating confirmed that these two individuals were indeed British Early Neolithic in date, while the other two had the expected 'Western Hunter-Gatherer' ancestry genomic signatures, with the two groups separated in time by nearly five millennia. Moreover, the two Neolithic samples were both crania, while the two Mesolithic samples were long bones. Given the absence of Neolithic dates in the previous sizeable dating programme combined with the difficult history of the collection, i.e., the WWII bombing of its Bristol repository, this raised the question of whether the crania might in fact be from another site. As we show in this paper, a very strong case can be made that the crania do in fact originate from Aveline's Hole. Additional radiocarbon dating (14 in total, including the above mentioned four) suggests that about half the cranial elements from the site fall within the Early Neolithic, though there is still no evidence for the deposition of post-cranial remains at this time, nor is there any burial evidence in the long intervening period between the Early Mesolithic and the Early Neolithic. Intriguingly, craniometric analyses of legacy data including three crania lost in the bombing suggest that one, Aveline's Hole 'A', may be Upper Palaeolithic in date. As part of this re-investigation of the human remains from the site, we present new stable carbon and nitrogen isotope analyses that differ significantly from those originally reported for the Early Mesolithic, with the new results more in keeping with other isotopic data for this period. We also present new stable carbon and nitrogen isotope results on human remains from the nearby Early Mesolithic sites of Badger Hole and Greylake, and report new Early Mesolithic radiocarbon dates and isotopic data from Cannington Park Quarry. Clear isotopic differences between the Early Mesolithic and the Neolithic remains can be seen, but these are argued to relate primarily to shifts in the underlying ecological baselines, rather than to differences in types of foods consumed (with the caveat that terrestrial wild and domesticated foods will be isotopically similar). The genetic data are summarised, giving evidence not only of the ancestry of Mesolithic and Neolithic individuals from Aveline's Hole, but also suggesting something of their physical appearance. The degree of population replacement now indicated by ancient DNA suggests that there was a substantial migration of farmers into Britain at the start of the Neolithic. This new information demonstrates the archaeological importance of Aveline's Hole for both the Mesolithic and Neolithic periods.

Proceedings of the University of Bristol Spelaeological Society

Papers are available 12 months after publication and can be downloaded free of charge, without registration after this period. The attached file is the published pdf.