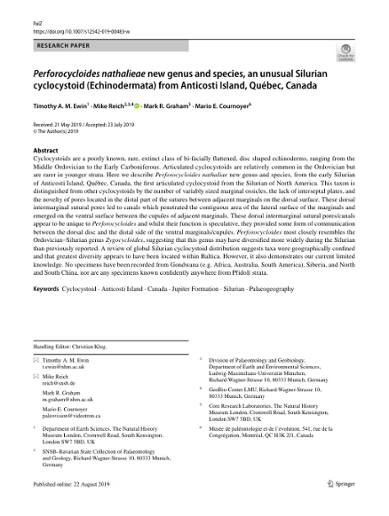 Cyclocystoids are a poorly known, rare, extinct class of bi-facially flattened, disc shaped echinoderms, ranging from the Middle Ordovician to the Early Carboniferous. Articulated cyclocystoids are relatively common in the Ordovician but are rarer in younger strata. Here we describe Perforocycloides nathaliae new genus and species, from the early Silurian of Anticosti Island, Québec, Canada, the first articulated cyclocystoid from the Silurian of North America. This taxon is distinguished from other cyclocystoids by the number of variably sized marginal ossicles, the lack of interseptal plates, and the novelty of pores located in the distal part of the sutures between adjacent marginals on the dorsal surface. These dorsal intermarginal sutural pores led to canals which penetrated the contiguous area of the lateral surface of the marginals and emerged on the ventral surface between the cupules of adjacent marginals. These dorsal intermarginal sutural pores/canals appear to be unique to Perforocycloides and whilst their function is speculative, they provided some form of communication between the dorsal disc and the distal side of the ventral marginals/cupules. Perforocycloides most closely resembles the Ordovician–Silurian genus Zygocycloides, suggesting that this genus may have diversified more widely during the Silurian than previously reported. A review of global Silurian cyclocystoid distribution suggests taxa were geographically confined and that greatest diversity appears to have been located within Baltica. However, it also demonstrates our current limited knowledge. No specimens have been recorded from Gondwana (e.g. Africa, Australia, South America), Siberia, and North and South China, nor are any specimens known confidently anywhere from Přidolí strata.

This article is distributed under the terms of the Creative Commons Attribution 4.0 International License (http://creativecommons.org/licenses/by/4.0/), which permits unrestricted use, distribution, and reproduction in any medium, provided you give appropriate credit to the original author(s) and the source, provide a link to the Creative Commons license, and indicate if changes were made.