Understanding the microscale spatial distribution and mineralogical residency of Re in pyrite: Examples from carbonate-hosted Zn-Pb ores and implications for pyrite Re-Os geochronology 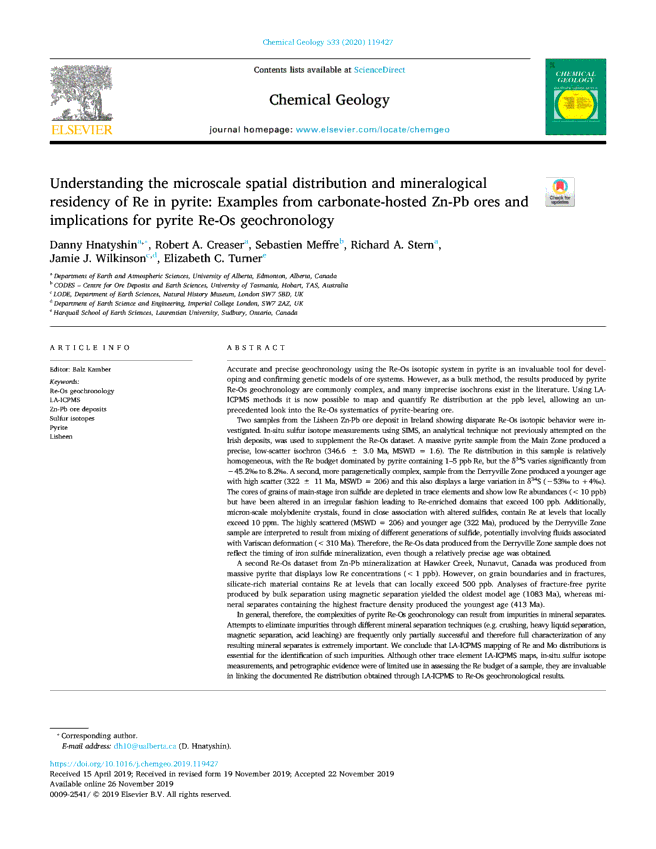 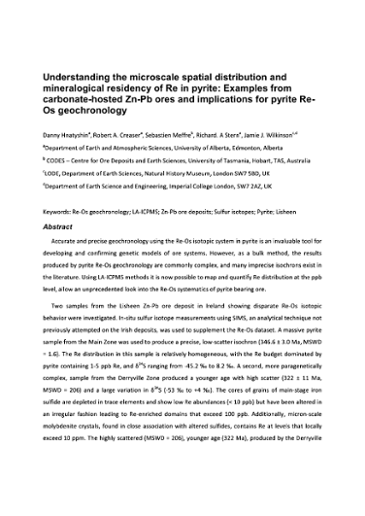 Accurate and precise geochronology using the Re-Os isotopic system in pyrite is an invaluable tool for developing and confirming genetic models of ore systems. However, as a bulk method, the results produced by pyrite Re-Os geochronology are commonly complex, and many imprecise isochrons exist in the literature. Using LA-ICPMS methods it is now possible to map and quantify Re distribution at the ppb level, allowing an unprecedented look into the Re-Os systematics of pyrite-bearing ore. Two samples from the Lisheen Zn-Pb ore deposit in Ireland showing disparate Re-Os isotopic behavior were investigated. In-situ sulfur isotope measurements using SIMS, an analytical technique not previously attempted on the Irish deposits, was used to supplement the Re-Os dataset. A massive pyrite sample from the Main Zone produced a precise, low-scatter isochron (346.6 ± 3.0 Ma, MSWD = 1.6). The Re distribution in this sample is relatively homogeneous, with the Re budget dominated by pyrite containing 1–5 ppb Re, but the δ34S varies significantly from −45.2‰ to 8.2‰. A second, more paragenetically complex, sample from the Derryville Zone produced a younger age with high scatter (322 ± 11 Ma, MSWD = 206) and this also displays a large variation in δ34S (−53‰ to +4‰). The cores of grains of main-stage iron sulfide are depleted in trace elements and show low Re abundances (<10 ppb) but have been altered in an irregular fashion leading to Re-enriched domains that exceed 100 ppb. Additionally, micron-scale molybdenite crystals, found in close association with altered sulfides, contain Re at levels that locally exceed 10 ppm. The highly scattered (MSWD = 206) and younger age (322 Ma), produced by the Derryville Zone sample are interpreted to result from mixing of different generations of sulfide, potentially involving fluids associated with Variscan deformation (<310 Ma). Therefore, the Re-Os data produced from the Derryville Zone sample does not reflect the timing of iron sulfide mineralization, even though a relatively precise age was obtained. A second Re-Os dataset from Zn-Pb mineralization at Hawker Creek, Nunavut, Canada was produced from massive pyrite that displays low Re concentrations (<1 ppb). However, on grain boundaries and in fractures, silicate-rich material contains Re at levels that can locally exceed 500 ppb. Analyses of fracture-free pyrite produced by bulk separation using magnetic separation yielded the oldest model age (1083 Ma), whereas mineral separates containing the highest fracture density produced the youngest age (413 Ma). In general, therefore, the complexities of pyrite Re-Os geochronology can result from impurities in mineral separates. Attempts to eliminate impurities through different mineral separation techniques (e.g. crushing, heavy liquid separation, magnetic separation, acid leaching) are frequently only partially successful and therefore full characterization of any resulting mineral separates is extremely important. We conclude that LA-ICPMS mapping of Re and Mo distributions is essential for the identification of such impurities. Although other trace element LA-ICPMS maps, in-situ sulfur isotope measurements, and petrographic evidence were of limited use in assessing the Re budget of a sample, they are invaluable in linking the documented Re distribution obtained through LA-ICPMS to Re-Os geochronological results.

© 2019 Elsevier B.V. All rights reserved. The attached document is the author(’s’) final accepted/submitted version of the journal article. You are advised to consult the publisher’s version if you wish to cite from it.

Except where otherwise noted, this item's license is described as closedAccess