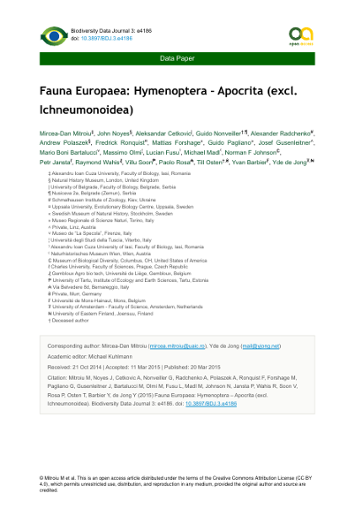 Fauna Europaea provides a public web-service with an index of scientific names (including important synonyms) of all living European land and freshwater animals, their geographical distribution at country level (up to the Urals, excluding the Caucasus region), and some additional information. The Fauna Europaea project covers about 230,000 taxonomic names, including 130,000 accepted species and 14,000 accepted subspecies. This represents a huge effort by more than 400 contributing specialists throughout Europe and is a unique (standard) reference suitable for many users in science, government, industry, nature conservation and education. Hymenoptera is one of the four largest orders of insects, with about 130,000 described species. In the Fauna Europaea database, ‘Hymenoptera - Apocrita (excluding Ichneumonoidea)’ comprises 13 superfamilies, 52 families, 91 subfamilies, 38 tribes and 13,211 species. The paper includes a complete list of taxa dealt with, the number of species in each and the name of the specialist responsible for data acquisition. As a general conclusion about the European fauna of Hymenoptera, the best known countries in terms of recorded species are those from northwestern Europe, with the least known fauna probably in the more eastern and southeastern parts of Europe.

© Mitroiu M et al. This is an open access article distributed under the terms of the Creative Commons Attribution License (CC BY 4.0), which permits unrestricted use, distribution, and reproduction in any medium, provided the original author and source are credited.