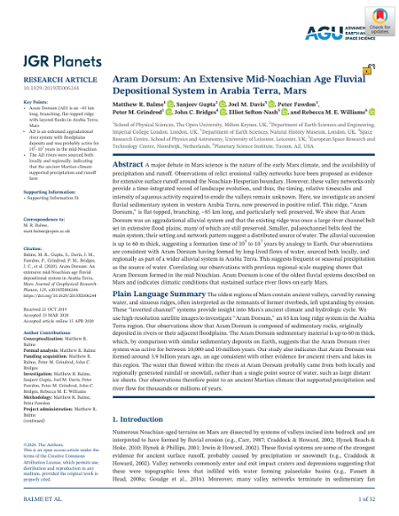 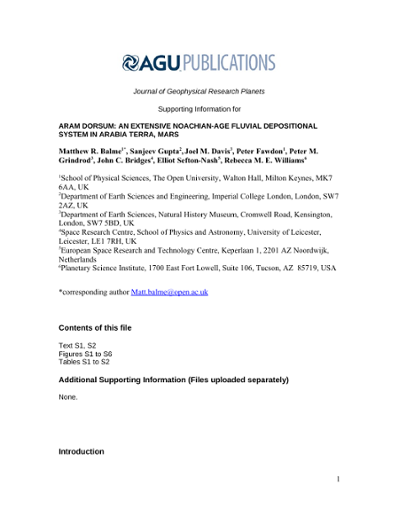 A major debate in Mars science is the nature of the early Mars climate, and the availability ofprecipitation and runoff. Observations of relict erosional valley networks have been proposed as evidencefor extensive surface runoff around the Noachian‐Hesperian boundary. However, these valley networks onlyprovide a time‐integrated record of landscape evolution, and thus, the timing, relative timescales andintensity of aqueous activity required to erode the valleys remain unknown. Here, we investigate an ancientﬂuvial sedimentary system in western Arabia Terra, now preserved in positive relief. This ridge, “AramDorsum,” is ﬂat‐topped, branching, ~85 km long, and particularly well preserved. We show that AramDorsum was an aggradational alluvial system and that the existing ridge was once a large river channel beltset in extensive ﬂood plains, many of which are still preserved. Smaller, palaeochannel belts feed themain system; their setting and network pattern suggest a distributed source of water. The alluvial successionis up to 60 m thick, suggesting a formation time of 105to 107years by analogy to Earth. Our observationsare consistent with Aram Dorsum having formed by long‐lived ﬂows of water, sourced both locally, andregionally as part of a wider alluvial system in Arabia Terra. This suggests frequent or seasonal precipitationas the source of water. Correlating our observations with previous regional‐scale mapping shows thatAram Dorsum formed in the mid‐Noachian. Aram Dorsum is one of the oldest ﬂuvial systems described onMars and indicates climatic conditions that sustained surface river ﬂows on early Mars.

©2020. The Authors. This is an open access article under the terms of the Creative Commons Attribution License, which permits use, distribution and reproduction in any medium, provided the original work is properly cited. The attached file is the published pdf.