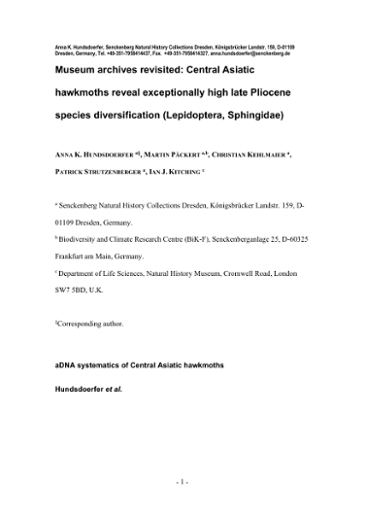 Three high‐elevation Hyles species of Central Asia have proven difficult to sample, and thus, only a limited number of specimens are available for study. Ancient DNA techniques were applied to sequence two mitochondrial genes from ‘historic’ museum specimens of Hyles gallii, Hyles renneri and Hyles salangensis to elucidate the phylogenetic relationships of these species. This approach enabled us to include the holotypes and paratypes. The status of H. salangensis as a species endemic to a mountain range north of Kabul in Afghanistan is confirmed by this study. It is most closely related to Hyles nicaea and H. gallii, and quite distant from the clade comprising the species from Hyles vespertilio to Hyles tithymali, despite this group and H. salangensis both completely lacking an arolium on the pretarsus. Our results show that the samples assigned to H. renneri and Hyles livornica tatsienluica are conspecific and so we reinstate Hyles tatsienluica stat. nov. as the valid name for this species and synonymize H. renneri syn. nov. with it. This study shows that the distribution range postulated for H. tatsienluica extends from Nepal well into the mountains of south‐western China. The distribution ranges of H. livornica and H. tatsienluica overlap. The study confirms the previously proposed synonymies of Hyles nepalensis, Hyles gallii intermedia and Hyles gallii tibetanica with H. gallii. Extensive species sampling (over 80% of Hyles species) in this study allowed additional analyses. The dated phylogeny reveals the global Hyles hawkmoth radiation to be much more recent than previously thought: it began in the Late Miocene and culminated in a Pleistocene burst of diversification in the Northern Hemisphere. Ancestral ranges of basal nodes were reconstructed as highly equivocal, but the Neotropics has the highest probability in the two oldest nodes. Although the origins of the Madagascan and Australian species also remain ambiguous, a large crown clade of fifteen species was reconstructed to have originated in the Palaearctic. The wide distribution ranges of the two migratory species, H. livornica and H. gallii, appear to blur any traces of the biogeographic origin of the clades containing these species. Specialization in larval host plant use onto particular plant families from the ancestral condition ‘polyphagous’ may have led to an increased rate of speciation and phylogenetic diversification in three subgroups of Hyles (the Hawaiian clade, the Hyles centralasiae group and the Hyles euphorbiae complex).

This is the pre-peer reviewed version of the following article: Hundsdoerfer, A.K., Päckert, M., Kehlmaier, C., Strutzenberger, P. & Kitching, I.J. ( 2017). Museum archives revisited: central Asiatic hawkmoths reveal exceptionally high late Pliocene species diversification (Lepidoptera, Sphingidae). —Zoologica Scripta, 46, 552– 570, which has been published in final form at https://doi.org/10.1111/zsc.12235. This article may be used for non-commercial purposes in accordance with Wiley Terms and Conditions for Self-Archiving. You are advised to consult the published version if you wish to cite from the article or view supporting information.