Evidence of Vent-Adaptation in Sponges Living at the Periphery of Hydrothermal Vent Environments: Ecological and Evolutionary Implications 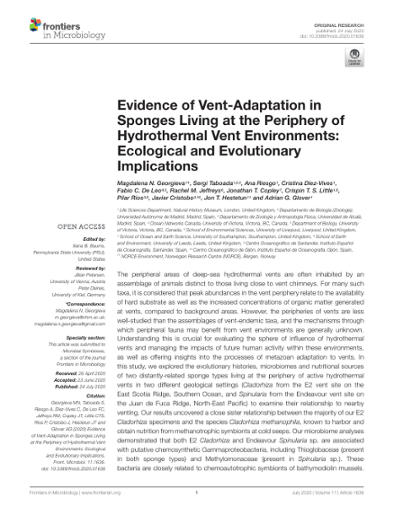 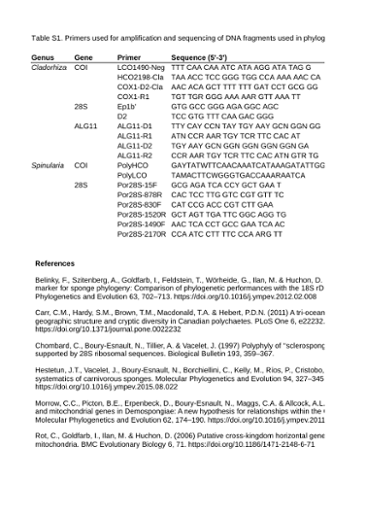 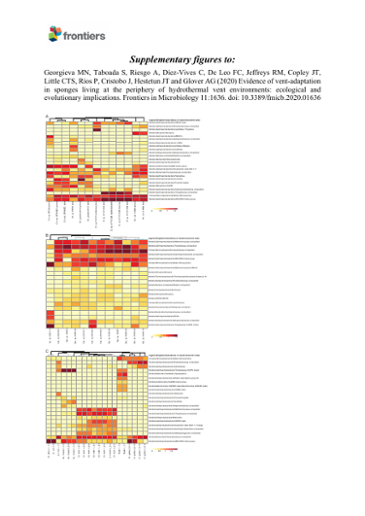 The peripheral areas of deep-sea hydrothermal vents are often inhabited by an assemblage of animals distinct to those living close to vent chimneys. For many such taxa, it is considered that peak abundances in the vent periphery relate to the availability of hard substrate as well as the increased concentrations of organic matter generated at vents, compared to background areas. However, the peripheries of vents are less well-studied than the assemblages of vent-endemic taxa, and the mechanisms through which peripheral fauna may benefit from vent environments are generally unknown. Understanding this is crucial for evaluating the sphere of influence of hydrothermal vents and managing the impacts of future human activity within these environments, as well as offering insights into the processes of metazoan adaptation to vents. In this study, we explored the evolutionary histories, microbiomes and nutritional sources of two distantly-related sponge types living at the periphery of active hydrothermal vents in two different geological settings (Cladorhiza from the E2 vent site on the East Scotia Ridge, Southern Ocean, and Spinularia from the Endeavour vent site on the Juan de Fuca Ridge, North-East Pacific) to examine their relationship to nearby venting. Our results uncovered a close sister relationship between the majority of our E2 Cladorhiza specimens and the species Cladorhiza methanophila, known to harbor and obtain nutrition from methanotrophic symbionts at cold seeps. Our microbiome analyses demonstrated that both E2 Cladorhiza and Endeavour Spinularia sp. are associated with putative chemosynthetic Gammaproteobacteria, including Thioglobaceae (present in both sponge types) and Methylomonaceae (present in Spinularia sp.). These bacteria are closely related to chemoautotrophic symbionts of bathymodiolin mussels. Both vent-peripheral sponges demonstrate carbon and nitrogen isotopic signatures consistent with contributions to nutrition from chemosynthesis. This study expands the number of known associations between metazoans and potentially chemosynthetic Gammaproteobacteria, indicating that they can be incredibly widespread and also occur away from the immediate vicinity of chemosynthetic environments in the vent-periphery, where these sponges may be adapted to benefit from dispersed vent fluids.

© 2020 Georgieva, Taboada, Riesgo, Díez-Vives, De Leo, Jeffreys, Copley, Little, Ríos, Cristobo, Hestetun and Glover. This is an open-access article distributed under the terms of the Creative Commons Attribution License (CC BY). The use, distribution or reproduction in other forums is permitted, provided the original author(s) and the copyright owner(s) are credited and that the original publication in this journal is cited, in accordance with accepted academic practice. No use, distribution or reproduction is permitted which does not comply with these terms.