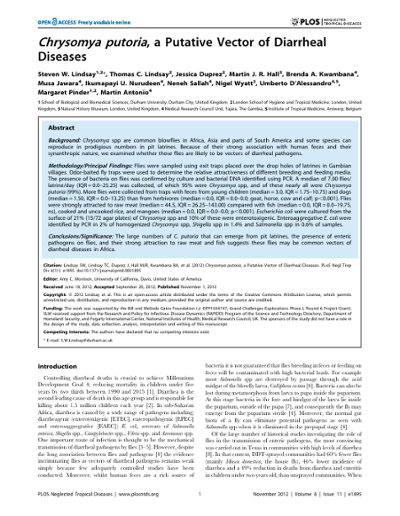 Background Chrysomya spp are common blowflies in Africa, Asia and parts of South America and some species can reproduce in prodigious numbers in pit latrines. Because of their strong association with human feces and their synanthropic nature, we examined whether these flies are likely to be vectors of diarrheal pathogens. Methodology/Principal Findings Flies were sampled using exit traps placed over the drop holes of latrines in Gambian villages. Odor-baited fly traps were used to determine the relative attractiveness of different breeding and feeding media. The presence of bacteria on flies was confirmed by culture and bacterial DNA identified using PCR. A median of 7.00 flies/latrine/day (IQR = 0.0–25.25) was collected, of which 95% were Chrysomya spp, and of these nearly all were Chrysomya putoria (99%). More flies were collected from traps with feces from young children (median = 3.0, IQR = 1.75–10.75) and dogs (median = 1.50, IQR = 0.0–13.25) than from herbivores (median = 0.0, IQR = 0.0–0.0; goat, horse, cow and calf; p<0.001). Flies were strongly attracted to raw meat (median = 44.5, IQR = 26.25–143.00) compared with fish (median = 0.0, IQR = 0.0–19.75, ns), cooked and uncooked rice, and mangoes (median = 0.0, IQR = 0.0–0.0; p<0.001). Escherichia coli were cultured from the surface of 21% (15/72 agar plates) of Chrysomya spp and 10% of these were enterotoxigenic. Enteroaggregative E. coli were identified by PCR in 2% of homogenized Chrysomya spp, Shigella spp in 1.4% and Salmonella spp in 0.6% of samples. Conclusions/Significance The large numbers of C. putoria that can emerge from pit latrines, the presence of enteric pathogens on flies, and their strong attraction to raw meat and fish suggests these flies may be common vectors of diarrheal diseases in Africa. Author Summary While it is well recognized that the house fly can transmit enteric pathogens, here we show the common African latrine fly, Chrysomya putoria, is likely to be an important vector of these pathogens, since an average latrine can produce 100,000 latrine flies each year. Our behavioral studies of flies in The Gambia show that latrine flies are attracted strongly to human feces, raw beef and fish, providing a clear mechanism for faecal pathogens to be transferred from faeces to food. We used PCR techniques to demonstrate that these flies are carrying Shigella, Salmonella and E. coli, all important causes of diarrhea. Moreover our culture work shows that these pathogens are viable. Latrine flies are likely to be important vectors of diarrheal disease, although further research is required to determine what proportion of infections are due to this fly.

© 2012 Lindsay et al. This is an open-access article distributed under the terms of the Creative Commons Attribution License, which permits unrestricted use, distribution, and reproduction in any medium, provided the original author and source are credited.