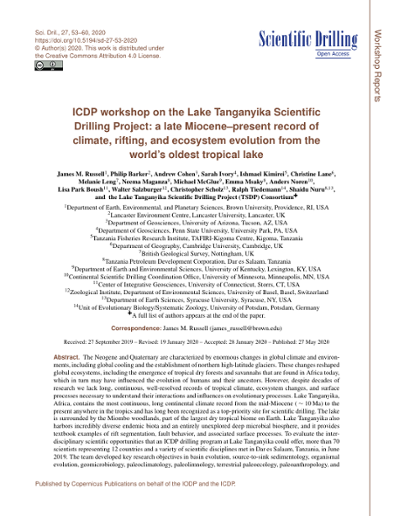 The Neogene and Quaternary are characterized by enormous changes in global climate and environments, including global cooling and the establishment of northern high-latitude glaciers. These changes reshaped global ecosystems, including the emergence of tropical dry forests and savannahs that are found in Africa today, which in turn may have influenced the evolution of humans and their ancestors. However, despite decades of research we lack long, continuous, well-resolved records of tropical climate, ecosystem changes, and surface processes necessary to understand their interactions and influences on evolutionary processes. Lake Tanganyika, Africa, contains the most continuous, long continental climate record from the mid-Miocene (∼10 Ma) to the present anywhere in the tropics and has long been recognized as a top-priority site for scientific drilling. The lake is surrounded by the Miombo woodlands, part of the largest dry tropical biome on Earth. Lake Tanganyika also harbors incredibly diverse endemic biota and an entirely unexplored deep microbial biosphere, and it provides textbook examples of rift segmentation, fault behavior, and associated surface processes. To evaluate the interdisciplinary scientific opportunities that an ICDP drilling program at Lake Tanganyika could offer, more than 70 scientists representing 12 countries and a variety of scientific disciplines met in Dar es Salaam, Tanzania, in June 2019. The team developed key research objectives in basin evolution, source-to-sink sedimentology, organismal evolution, geomicrobiology, paleoclimatology, paleolimnology, terrestrial paleoecology, paleoanthropology, and geochronology to be addressed through scientific drilling on Lake Tanganyika. They also identified drilling targets and strategies, logistical challenges, and education and capacity building programs to be carried out through the project. Participants concluded that a drilling program at Lake Tanganyika would produce the first continuous Miocene–present record from the tropics, transforming our understanding of global environmental change, the environmental context of human origins in Africa, and providing a detailed window into the dynamics, tempo and mode of biological diversification and adaptive radiations.

© Author(s) 2020. This open access article is distributed under the Creative Commons Attribution 4.0 License.