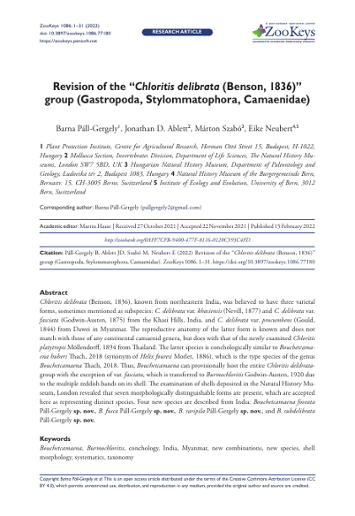 Chloritis delibrata (Benson, 1836), known from northeastern India, was believed to have three varietal forms, sometimes mentioned as subspecies: C. delibrata var. khasiensis (Nevill, 1877) and C. delibrata var. fasciata (Godwin-Austen, 1875) from the Khasi Hills, India, and C. delibrata var. procumbens (Gould, 1844) from Dawei in Myanmar. The reproductive anatomy of the latter form is known and does not match with those of any continental camaenid genera, but does with that of the newly examined Chloritis platytropis Möllendorff, 1894 from Thailand. The latter species is conchologically similar to Bouchetcamaena huberi Thach, 2018 (synonym of Helix fouresi Morlet, 1886), which is the type species of the genus Bouchetcamaena Thach, 2018. Thus, Bouchetcamaena can provisionally host the entire Chloritis delibrata -group with the exception of var. fasciata, which is transferred to Burmochloritis Godwin-Austen, 1920 due to the multiple reddish bands on its shell. The examination of shells deposited in the Natural History Museum, London revealed that seven morphologically distinguishable forms are present, which are accepted here as representing distinct species. Four new species are described from India: Bouchetcamaena foveata Páll-Gergely sp. nov., B. fusca Páll-Gergely sp. nov., B. raripila Páll-Gergely sp. nov., and B. subdelibrata Páll-Gergely sp. nov.

Copyright Barna Páll-Gergely et al. This is an open access article distributed under the terms of the Creative Commons Attribution License (CC BY 4.0), which permits unrestricted use, distribution, and reproduction in any medium, provided the original author and source are credited.