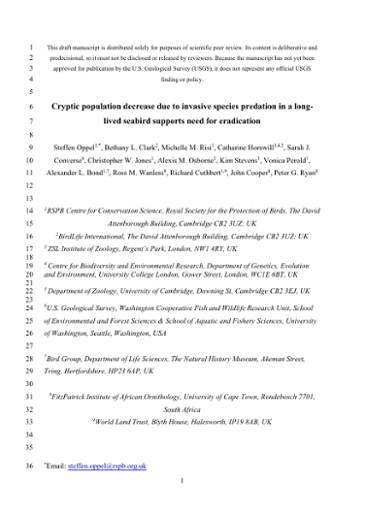 SUMMARY 1. Invasive species are one of the greatest drivers of biodiversity loss worldwide, but the eradication of invasive species from islands is a highly efficient management strategy. Because eradication operations require large financial investments, uncertainty over the magnitude of impacts of both invasive species and their removal can impede the willingness of decision makers to invest in eradication. Such uncertainty is prevalent for long-lived species that display an inherent lag between life stages affected by invasive species and those used for population status assessments. 2. Albatrosses are among the longest-living bird species and are threatened on land by invasive species and at sea by industrial fisheries. As in many seabird species, usually only a segment of the population (breeding adults) is used for status assessments, making it difficult to assess their population trends and the potential benefit of conservation action, such as the management of predatory invasive species. 3. We used population monitoring and mark-recapture data to estimate the past population trajectory of the Critically Endangered Tristan Albatross (Diomedea dabbenena) by accounting for unobservable birds at sea in an integrated population model. We then projected the future population trajectory for scenarios with or without predation by invasive house mice (Mus musculus) on their main site, Gough Island. 4. The adult breeding population remained stable between 2004 and 2021, but breeding success was low (31%) and our model indicated that the total population (including unobservable immature birds) decreased from a median estimate of 9795 to 7752 birds. Eradicating invasive mice leading to a two-fold increase in breeding success would result in a 1.8–7.6 times higher albatross population by 2050 (median estimate 10 352 individuals) than without this intervention. 5. Low reproductive output for long-lived species may lead to a cryptic population decrease, which can be obscured from readily available counts of breeding pairs by changes in the breeding population. Mouse eradication is necessary to revert the ongoing population decrease, even if this decrease is not yet apparent in the breeding population size.

Copyright: © 2022 The Authors. This document is the author’s submitted version of the journal article. You are advised to consult the published version if you wish to cite from it.